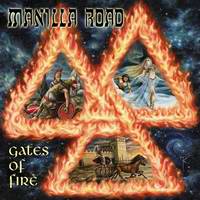 The Gods of Epic Metal are finally ready for the next attack!!!
„GATES OF FIRE“ is a real masterpiece in the typical traditional MANILLA ROAD style and has less experimental parts than the previous albums „ATLANTIS RISING“ and „SPIRAL CASTLE“.
The album contains 3 long Epic trilogies with a total playing time of over 70 minutes and is definitely a classic MANILLA ROAD album that every fan of „Open the Gates“, „Crystal Logic“ or „The Deluge“ will love!!! The concept research information shows, that also the lyrical concept is 100% classic Manilla Road.
“THE FROST GIANT’S DAUGHTER” was inspired by the story of the same name written by Robert E. Howard.
“OUT OF THE ASHES” was inspired by Virgil’s “The Aeneid”.
“GATES OF FIRE” was inspired by the heroic stand of King Leonides and his Spartans at the battle of Thermopylae.
The excellent cover artwork was painted by Jowita Kaminska. www.jowita-art.com
So, “GATES OF FIRE” is definitely a Must for every fan of 80ties MANILLA ROAD.

www.BattleCryRecords.de Contact: Andi Preisig This email address is being protected from spambots. You need JavaScript enabled to view it.