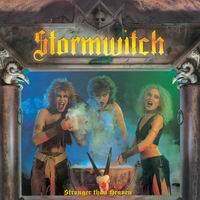 In 1986, Gama records released GAMA records released the STORMWITCH album, that is for most of the Witch fans is their best album ever: "Stronger than Heaven". With that album, STORMWITCH became more original with their image, because in spite of thousands of bands wearing leather and spikes, as STORMWITCH also did on their first two albums, they started wearing old costumes from the baroque era of the 17th and 18th centuries.
Besides this change in their image, the incredible quality of this album obviously helped the band a lot to move another step forward! The album featured songs like the speedish "Rats in the Attic", "Slave to Moonlight", the excellent title track „Stronger than Heaven" and much more, like the now famous "Ravenlord", covered in 1996 by the Swedish metalheads HAMMERFALL. Thanks to them, STORMWITCH fortunately then became known by the younger generations. In 1997, Andy Mück joined HAMMERFALL on stage to play a version of Ravenlord, at the "Heavy, oder was?!" festival in Tübingen.
In 1986 STORMWITCH did their first and only German tour supported by Stranger and Killer. Strangely, the band was way more popular in Eastern Europe and spent more time touring and promoting there. Now „Stronger than Heaven“ is finally available on CD with original artwork, lyrics, liner notes and unreleased live bonus tracks for the first time!!!

Website:www.battlecryrecords.de
Contact: This email address is being protected from spambots. You need JavaScript enabled to view it.